At last, I've taken time and ventured a little deeper into the Python language! I used the Tkinter package to develop a rip-off of an android game called chain-reaction. It's a simple multiplayer board game in which the first person to occupy all the blocks on the board or of the opponent(s) wins. Try downloading and playing the game with your friends, it's FUN!

Talking about the game it's quite simple to understand it if you play it. Simply speaking, if a block reaches its maximum capacity then it diffuses the contents to its neighbors(North, East, West, and South). A little bit knowledge about recursion can help you code the game with ease.

Here's the code for the game:

I could have used the random package to implement a bot(an opponent) that randomly selects tiles and make the game a little more interesting. But my aim was to just fiddle with the tkinter and I'm happy with the end result.

If you have a Python IDE go ahead and try to run the code and have fun :) (You can modify the code to adjust number of players and the dimensions of the board)
Games PvP Python recursion tkinter 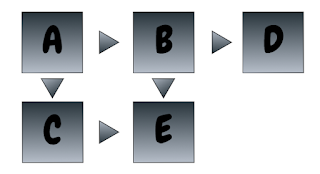 This post serves as a good introduction to the backtracking method which is used widely in various types of problems to find a possible solution. Here we'll be seeing how to solve the classical N-Queens problem using backtracking method. Backtracking : The Wikipedia page  for Backtracking defines it as "a general algorithm in which, we try to incrementally build candidates to the solutions, and discard a candidate as soon as we get to know that the candidate cannot possibly be completed to a valid solution".  If that sounds complicated and confusing, don't worry! Let us understand it by running through a small example. Consider you are trapped in a haunted house with five rooms named A, B, C, D and E. Initially, you are in room A and you need to reach room E to exit the house. Below is an image of the rooms in the house. The arrows in the image indicate the directions in which you can move. For example, you can move to rooms B and C from A but, you
Read more